So about that amazon costume thing....

So I tweeted a tweet and that kinda escalated.

I'm writing this in English now, since this kinda broke global barriers. Normally my blog is in Finnish (with one notable exception) since the competition for geek-related movie and comic blogs in Finland is noticeably smaller than say, in the US. Last time I wrote in English was when I reported about Worldcon 2017. But let's get down to business.

I shared an article (link here) by Kimi aka @Goldenlassogirl on twitter, where she showed the difference between the armor amazons used in Wonder Woman and Justice League. Mainly that the overall design is more revealing and "sexier" and that they are more rendered to the cis male gaze. I thought that article was pretty darn good, and I accompanied it with one of the pictures from that said article as a visual hook to see the story.

That did not happen. Most people just saw the picture, and a HUGE amount of people agreed with the article and me. That soon escalated; within couple of hours it gained over 1000 re-tweets and likes, and social media conversation was in full blow. Then it was picked by Hollywood Reporter, then by Elite Daily, Glamour, Mary Sue and now even by Finnish news site Nyt. As I write this now, it has over a thousand comments, 20k re-tweets and 35k likes. 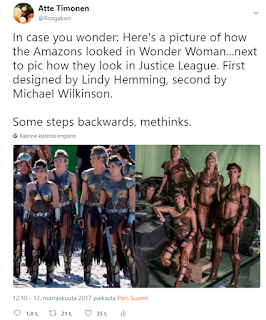 And I thought I should probably address that. Not the likes or re-tweets, though I of course appreciate the attention to the issue the story has brought. Most of the comments and re-tweets have been "positive"- i.e they agree with the original story and criticize the problematic designs, and that was my goal. But then there were also those who disagreed with the picture and my read on it, some with understandable and well-made arguments, some with incoherent yelling and blaming. Someone commented that my opinions are invalid, because my biography text says I'm a feminist. So yeah.

But let's talk about the issue at hand. WARNING: Some mild spoilers from Justice League, but nothing major. Just...be aware.

Like someone pointed out to me, these amazons are most likely from the pre-historic era, when the amazons, together with people of Atlantis and some other human warriors, fought against the attack from Apokolips lead by (assumedly) Steppenwolf. The argument goes, that they did not possess the same armor as they did before. Okay, sounds solid enough. Until you see the armor designs for warriors of Atlantis and other human warriors, who are (obviously) covered from head to toe, with amazons standing next to them in armors that feature ample cleavage and miniskirts. Like someone commented on twitter: "Is this war happening before the invention of common sense?" 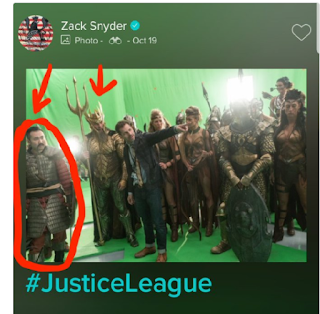 Secondary argument goes, that these are only for the flashbacks, and in the modern era they use their regular armors, showing the progress of amazonian culture. Okay, but a) those are still terrible designs and b) the modern-era armor has not escaped the changes. As seen in this picture, where amazon played by Brooke Ence showcases the three different armors for amazons- first one from the left is from Wonder Woman, followed by pre-historic bra-armor and modern day metallic bra-armor. Sure, not all amazons wear those (Hippolyta for one), but the change is still there.

And then there's the "they are for training, they are the same from Wonder Woman". No, they are not, and as many women have commented on that, no one trains in a push-up bras. Lindy Hemming's designs for their training gear echoed modern sensibilities for women athletes. New designs by Michael Wilkinson are more like "caveman swimsuit". And then there were comments that compared these to the costumes (such as they were) in 300 (also by Wilkinson), claiming double standard. Sorry, it does not exactly work like that. Men in 300 are not shown like that to tantalize female viewers, but male viewers. 300 is a power fantasy for male audiences, and highly fictional as far the visualization of both Greeks and Persians go. Wonder Woman was, like someone commented in twitter, "anything but a teenage boys yawnsome fantasy."

Here we see how important perspective is. Wonder Woman, directed by Patty Jenkins was applauded for how it showcased the women of Themyscira; powerful and beautiful, not sexualised by male gaze. Justice League is directed by Zack Snyder and Joss Whedon, and time will only tell how they decide to represent amazons. Lindsey Ellis explained in her brilliant video "Framing Megan Fox" how framing and aesthetics always supersede the rest of the text. It does not matter what Snyder and Whedon do with amazons or how they thought it would show, if the only thing visually left is sexualised image under male gaze.

So here we are. I tweeted a picture and everything kinda blew up. I'm sure this will die down soon. Justice League is right around the corner, and we will soon see how the movie uses the amazons in it. I have some fears, but I am going to see it anyway. My point was never to sway someone from watching Justice League. While I might have my problems with the franchise (except for Wonder Woman which rocks), I am still supporting DC to make more movies. What I aimed to do was to raise awareness for the original article and share my opinion about a change I was not happy with. I believe fans can and should criticize things they love, and I love DC Comics. I'm sure someone will dispute my fan-status based on this, but I just wrote a long article that is basically pure praise for Justice League animated series. I want them to be good at this, and I also believe making a product that is not aimed only for male audiences to enjoy is a way to achieve that.

I hope that about wraps this up. I got my tickets to see Justice League tomorrow evening. Then we see the truth, whether it is wearing leather bikinis or not.

Ps. I really wish next time Hollywood Reporter mentions my name, it would be something else than pretty popular tweet.

PPS. I have for now shut down mentions in twitter considering that particular tweet, so I don't anymore see every new angry comment or about the 3,4579th picture of 300's Spartans.
Lähettänyt Aasa T klo 0.45